Missouri Portable Cabins for Disaster Evacuation or Other Functions

It’s a case of too many students and too little space. Many Delhi University colleges, grappling with the problem of over-admissions and the impossibility of creating infrastructure overnight, have resorted to putting up semi-permanent structures — portable cabins — to hold classes.

At Ramanujan College, formerly known as Deshbandhu (Evening) College, around 15 portable cabins will serve as classrooms when the new session begins on July 24. 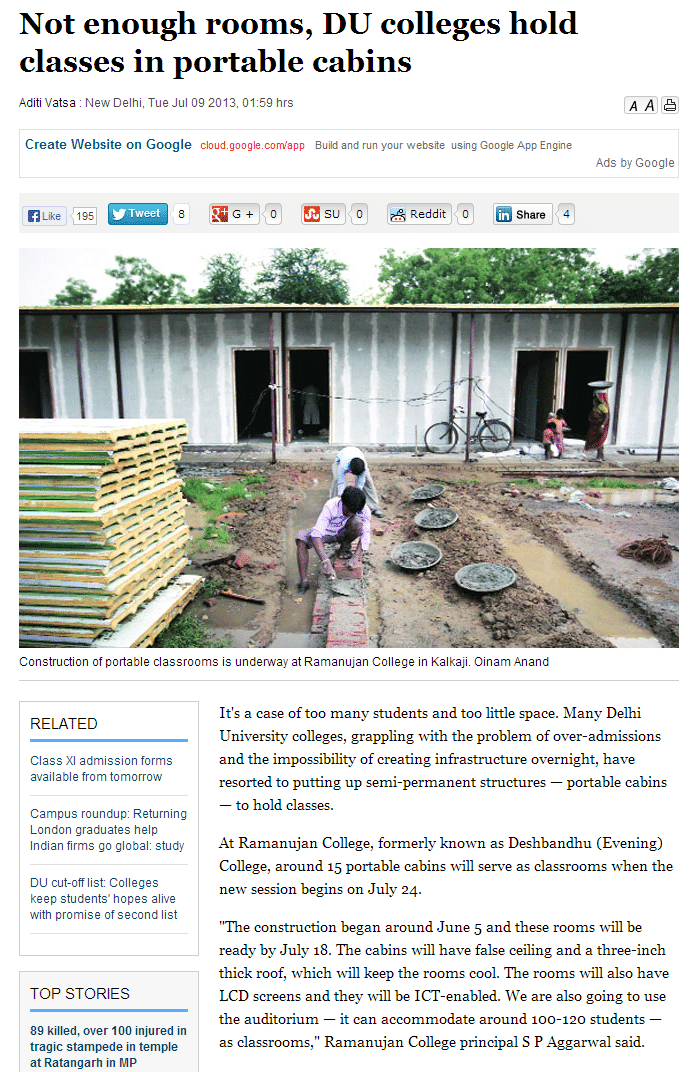 “The construction began around June 5 and these rooms will be ready by July 18. The cabins will have false ceiling and a three-inch thick roof, which will keep the rooms cool. The rooms will also have LCD screens and they will be ICT-enabled. We are also going to use the auditorium — it can accommodate around 100-120 students — as classrooms,” Ramanujan College principal S P Aggarwal said.

The U.S. may not have much of a problem regarding classrooms, but it’s a serious educational issue in some parts of the world like India. A number of colleges and universities in New Delhi have turned to portable cabins to fill the deficit in classrooms in time for the school year. Despite their ease of construction, don’t be fooled; these cabins are tough and durable enough for their purpose. In some cases, the colleges have even decided to make these cabins into permanent structures.

This isn’t unusual even by American standards; portable cabins in Missouri can be used as either guest quarters or storage sheds. As the parts are made in a workshop to fit each other easily, it only takes a little time to assemble them on-site. This cuts into the total cost of construction, saving customers thousands of dollars in fabrication and labor. They can also be wired for appliances and other fixtures to work in them, making them ideal for almost any kind of function, showing that they’re extremely versatile and adaptive to situtations.

The colleges in New Delhi opted to go for a simple cabin design for mass production, but they can be designed to custom specifications. They can be made to appear like a real house for a fraction of the cost. Quality portable cabins in Missouri from companies like Classic Building Sales can even be used for very important functions such as when natural disasters strike and many people need to evacuate to safer places temporarily.