In a New York Magazine essay, Ann Friedman muses about what it means to be a man in modern times and examined recent events that help define what is considered masculine by society and particularly by men.

What’s striking isn’t the lack of consensus on what defines masculinity now, but the utter confusion about how to go about doing so. That’s because America is finally getting around to having the conversation about what it means to be a man that, decades ago, feminism forced us to have about womanhood. Women still face social consequences when they don’t conform neatly to gender norms, but many of even the most ideologically progressive men are just now starting to talk about how to break with masculine stereotypes and still hang onto a sense of gender identity. Goldberg and Rosin, in using traditional definitions of manhood (the simple, stoic breadwinner), declare him dead, or at least less marketable to advertisers. 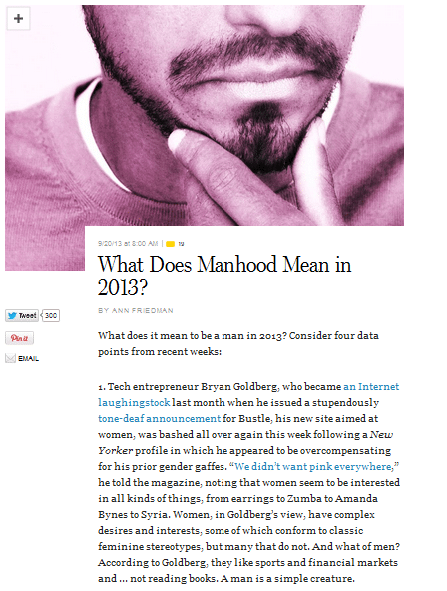 A man of today can choose to play up the stereotype of macho and stoic or choose to be more in touch with his feminine side. Regardless of his decision, however, what is very common among of them is that the role of family provider remains strong despite the fact that forty percent of homes with children have female breadwinners. Another characteristic that many men share is the need for personal space at home where they can retreat to and enjoy their interests alone, a place that many refer to as a man cave.

According to a BBC report, man caves are becoming increasingly popular, with enthusiasts spending thousands of dollars to retrofit them. The contents of these rooms can either be expensive entertainment systems or various power tools and carpentry equipment, depending on owner interests. Missouri portable buildings can be very useful for these purposes, and companies such as Classic Building Sales can provide custom looks for even the most discerning man.

As quality Missouri portable buildings are detached from the house, they are extremely versatile and can serve as areas where men can spend hours alone, which is something every man needs from time to time. In his book, “Men and Sheds”, author Gordon Thorburn likened men’s sheds to women’s handbags; they both carry everything that is needed by the owner.